We are working to advance a deep pipeline of precision therapies, designed to allow patients to live longer, better lives. Our approach combines world-leading expertise in protein kinases with sound execution and an intense focus on discovery.

and SUZHOU, , /PRNewswire/ --  (NASDAQ:BPMC), a leader in discovering and developing targeted kinase medicines for patients with genomically defined diseases, and , a privately-held biopharmaceutical company devoted to developing a new generation of innovative drugs, today announced an exclusive collaboration and license agreement for the development and commercialization of avapritinib, BLU-554 and BLU-667 in Mainland China, , and , either as monotherapies or combination therapies. Discovered and developed by , avapritinib, BLU-554 and BLU-667 are potent and highly selective investigational kinase medicines that have each demonstrated clinical proof-of-concept in genomically defined subsets of patients with cancer. will retain all rights to the licensed products in the rest of the world. 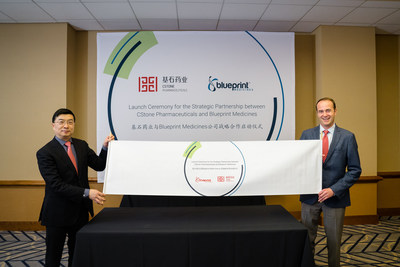 The collaboration strengthens portfolio with exclusive rights in the territory to three clinical-stage targeted therapies and expands global efforts to address patient populations with high unmet needs. will lead clinical development of the licensed products in the territory by leveraging its regulatory expertise and broad local network, with the goal of commercializing the licensed products in the territory either as monotherapies or combination therapies. In addition, the companies plan to initiate a proof-of-concept clinical trial in evaluating BLU-554 in combination with CS1001, a clinical-stage anti-programmed death ligand-1 (PD-L1) immunotherapy being developed by , as a first-line therapy for patients with hepatocellular carcinoma (HCC).

"Founded by seasoned executives with deep global and regional development experience and with a growing portfolio of potentially complementary cancer therapies, is an ideal partner in ," said , Chief Executive Officer of . "With recent regulatory reforms in and the emergence of innovative companies like , we believe this forward-looking collaboration has the potential to expand our ability to address significant patient needs in while supporting global development of avapritinib, BLU-554 and BLU-667. In particular, we are excited to announce the expansion of the BLU-554 clinical development program in , where more than half of all new cases of hepatocellular carcinoma worldwide occur each year."

"We are thrilled to enter into this collaboration with , a leader in the discovery and development of highly selective kinase medicines, as the first step in a potentially long-term strategic partnership," said , Chief Executive Officer of . "Based on the compelling clinical data reported to date, we believe targeted therapies – avapritinib, BLU-554 and BLU-667 – hold promise for dramatically altering the treatment landscape for patients in with gastrointestinal stromal tumors, hepatocellular carcinoma, non-small cell lung cancer and other cancers. In addition, our rich pipeline of investigational cancer medicines enables exploration of combination treatment approaches with the potential to further improve patient outcomes worldwide."

Subject to the terms of the agreement, will receive an upfront cash payment of and will be eligible to receive up to approximately in potential milestone payments, including related to development and regulatory milestones and related to sales-based milestones. In addition, will be obligated to pay tiered percentage royalties on a licensed product-by-licensed product basis ranging from the mid-teens to low twenties on annual net sales of each licensed product in the territory, subject to adjustment in specified circumstances.

Avapritinib is an orally available, potent and highly selective inhibitor of KIT and PDGFRα. Preclinical data have shown that avapritinib is active across a broad spectrum of KIT and PDGFRα mutations, including KIT D816V, PDGFRα D842V and KIT exon 17 mutations, for which there are limited or no effective treatment options. is initially developing avapritinib, an investigational medicine, for the treatment of patients with advanced gastrointestinal stromal tumors (GIST) and advanced systemic mastocytosis.

BLU-554 is an orally available, potent, irreversible inhibitor of FGFR4. BLU-554 was specifically designed by to inhibit FGFR4 with exquisite selectivity, thereby sparing the paralogs FGFR1, FGFR2 and FGFR3. is developing BLU-554, an investigational medicine, for the treatment of patients with FGFR4-activated HCC. estimates that approximately 30 percent of patients with HCC have tumors with aberrantly activated FGFR4 signaling. The has granted orphan drug designation to BLU-554.

A first-in-human Phase I study (CS1001-101) has been conducted by since to evaluate the safety, tolerability, pharmacokinetics and anti-tumor activity of CS1001 in patients with advanced tumors in . The Phase Ia (dose escalation) portion was completed in , and the Phase Ib (dose expansion) portion has recently started patient recruitment. In parallel, several pivotal studies are underway, including tumor types with high incidence and prevalence rates in .

Blueprint Medicines is developing a new generation of targeted and potent kinase medicines to improve the lives of patients with genomically defined diseases. Its approach is rooted in a deep understanding of the genetic blueprint of cancer and other disease driven by the abnormal activation of kinases. is advancing multiple programs in clinical development for subsets of patients with gastrointestinal stromal tumors, hepatocellular carcinoma, systemic mastocytosis, non-small cell lung cancer, medullary thyroid cancer and other advanced solid tumors, as well as multiple programs in research and preclinical development. For more information, please visit www.blueprintmedicines.com.

is a clinical stage biopharmaceutical company devoted to the development of innovative drugs. With a broad pipeline, the company engages in the development of cancer therapeutics with a special focus on immuno-oncology based combination therapies. All members of the management team are seasoned executives from top multinational pharmaceutical companies. CStone has successfully built up its core competency in clinical development and translational medicine. The company is backed by prestigious VC/PE funds via two financing rounds to date, raising in a Series A round in , followed by in a Series B round in . With an experienced team, a rich pipeline, a robust R&D model, and substantial funding, CStone is well positioned as the partner of choice for multinational pharmaceutical / biotech companies to develop drugs in and the . For more information about , please visit: www.cstonepharma.com

This press release contains forward-looking statements within the meaning of the Private Securities Litigation Reform Act of 1995, as amended, including, without limitation, statements regarding the collaboration and license agreement between and , including anticipated milestone and other payments under the collaboration; expectations regarding ability to expand its programs for avapritinib, BLU-554 and BLU-667 globally and in the territory; the potential benefits of or current and future drug candidates, whether as a monotherapy or combination therapy, in treating patients, including patients in the territory; expectations regarding the impact of current or future regulatory reforms in the territory; plans and expectations regarding combination treatment approaches with current or future drug candidates; plans and timelines for expanding ongoing Phase 1 clinical trial for BLU-554 to the territory; plans and timelines for initiating a proof-of-concept clinical trial in evaluating BLU-554 in combination with CS1001 as a first-line therapy for patients with HCC; expectations regarding global efforts to address patient populations with high unmet needs; and strategy, business plans and focus. The words "may," "will," "could," "would," "should," "expect," "plan," "anticipate," "intend," "believe," "estimate," "predict," "project," "potential," "continue," "target" and similar expressions are intended to identify forward-looking statements, although not all forward-looking statements contain these identifying words. Any forward-looking statements in this press release are based on management's current expectations and beliefs and are subject to a number of risks, uncertainties and important factors that may cause actual events or results to differ materially from those expressed or implied by any forward-looking statements contained in this press release, including, without limitation, risks and uncertainties related to the delay of any current or planned clinical trials or the development of drug candidates, including avapritinib, BLU-554, BLU-667 and BLU-782; advancement of multiple early-stage efforts; ability to successfully demonstrate the safety and efficacy of its drug candidates; the preclinical and clinical results for drug candidates, which may not support further development of such drug candidates; actions of regulatory agencies, which may affect the initiation, timing and progress of clinical trials; ability to develop and commercialize companion diagnostic tests for its current and future drug candidates, including companion diagnostic tests for BLU-554 for FGFR4-driven HCC, avapritinib for PDGFRα D842V-driven GIST and BLU-667 for RET-driven NSCLC; the success of current and future collaborations, including its cancer immunotherapy collaboration with and and its collaboration with . These and other risks and uncertainties are described in greater detail in the section entitled "Risk Factors" in Quarterly Report on Form 10-Q for the quarter ended , as filed with the () on , and any other filings that has made or may make with the in the future. Any forward-looking statements contained in this press release represent views only as of the date hereof and should not be relied upon as representing its views as of any subsequent date. Except as required by law, explicitly disclaims any obligation to update any forward-looking statements.